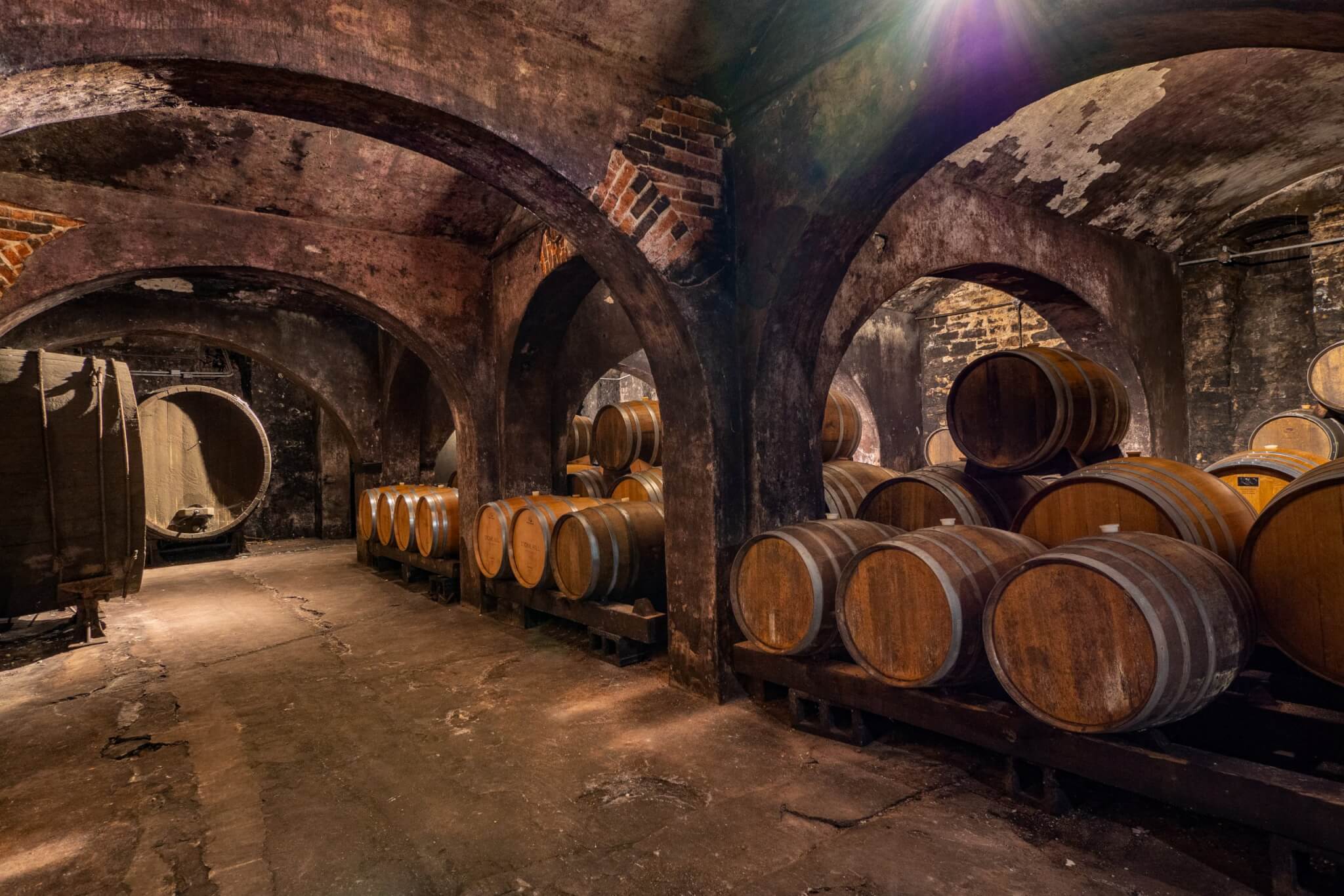 Hermann is the heart and soul of Missouri Wine Country. The wineries in and around the historic German community sell nearly 200,000 gallons of wine a year, about a third of the statewide total. But today’s success story is a mere shadow of the town’s incredible winemaking past because making wine was a matter of economic survival for Hermann’s founders. When the first German settlers arrived at the site of their new town on the Missouri River in 1837, they discovered the land their agent had purchased was not the land of milk and honey they had been promised, but a rugged wilderness, difficult to farm.

Taking their cue from the tangles of wild grapevines that covered the craggy hillsides, the settlers began planting hybrid grapes and making wine. Because the settlers were experimenting with grapes and sometimes using contaminated barrels and makeshift wine cellars, much of the first Hermann wine was of poor quality and was not marketable. Things began looking up in 1843 with the introduction of the first cultivated grape varieties—Isabella, Virginia Seedling, Catawba, and Delaware.

Town fathers nurtured the infant wine industry by selling “grape lots,” vacant city lots a settler could buy for $50, interest-free, over a five-year period. The only condition was that the lot had to be planted in grapes. About 600 grape lots were eventually sold. The entire town, it seemed, was growing grapes, building wine cellars, and making wine. Home wine cellars were common, and wine halls were a favorite Sunday gathering place where families socialized after church.

Honing In The Craft

Hermann held its first Weinfest in the fall of 1848, a tradition that continues in today’s Octoberfest celebrations. The quality of Hermann wines improved dramatically in the mid-1800s, thanks in large part to the work of George Husmann, whose father had purchased property near Hermann while the family was still living in Germany. A self-taught scientist, Husmann studied soil types and crossed wild and cultivated grapes to create hybrids that could stand up to Missouri’s hot, humid summers and freezing winters.

Husmann’s research proved invaluable when the vineyards of southern France were devastated in the 1860s by phylloxera, a blight spread by aphids. During the 1870s, Husmann, personally, and Missouri grape growers, overall, shipped millions of phylloxera-resistant rootstocks to France. In commemoration of the event, two statutes were erected in Montpellier, France. One depicts a young woman cradling an older woman in her arms, a representation of the New World saving the Old World. Husmann, who was recognized by the French government, later moved from Hermann to California, where he became a founding father of the Napa Valley wine industry.

By the end of the 19th century, Hermann was one of the largest wine-producing regions in the world. Hermann was the number one wine producer for the United States between 1865 and 1870, when California began developing its wine industry. By 1904, however, one-twelfth of all U.S. wines on the market, nearly three million gallons, still came from Missouri, and practically all of that was from Hermann. Some 11,000 acres of terraced vineyards covered the hillsides in and around Hermann.

Stone Hill Winery, where it all began, won the first of eight World’s Fair gold medals in Vienna in 1873. By the turn of the century, Stone Hill was the second-largest winery in the country. The winery’s vast network of underground cellars is still among the largest in the world. The famous Apostle Cellar held 12 enormous casks, each carved with the likeness of one of the Apostles. Eight underground cellars at Stone Hill Winery stored a total of 1.25 million gallons of wine.

This golden era came to an abrupt and bitter end with the passage of the Volstead Act in 1919. Prohibition was a disaster for Hermann, which, like the rest of Missouri, felt the full fury of the temperance movement. Local lore has it that the streets ran red as wine barrels were emptied and then destroyed. Even the vineyards were uprooted. Stone Hill’s Apostle casks were shipped to South America for safekeeping, never to be seen again. Twelve empty arches bear silent witness to the loss.

Prohibition and anti-German sentiment from World War I sent Hermann reeling into the Great Depression years before the rest of the country. For decades the only evidence of the town’s once-glorious winemaking past was in churches, which were still permitted to make sacramental wine, or hidden away in barns. Stone Hill’s huge vaulted cellars were converted to commercial mushroom growing.

A renaissance began in 1965 when Jim and Betty Held began making wine at Stone Hill Winery, 30 years after the repeal of Prohibition. Today, Missouri has about 130 wineries and a state-funded Grape and Wine program at the University of Missouri. Venerable native grape varieties, Norton, Catawba, Niagara, and Concord, have been joined by exciting new French-American hybrids, such as Vidal, Seyval, Vignoles, and, most recently, Chardonel. Missouri wine is back, and this time it’s here to stay.

Experience It For Yourself

Experience the best Missouri Wine Country has to offer in Hermann—explore the great options on our Sip & Savor page.