The Statues of Hermann: Part 3

Charles Eitzen was a renaissance man who still exemplifies the spirit of Hermann. A man of multiple interests and skills, Eitzen secured his standing in the community through hard, honest work. A statue located on the Gasconade County Courthouse lawn serves as the chief monument to his legacy in Hermann.

Eitzen was born in Germany and immigrated to America during the early stages of settling Hermann. He proved himself to be extraordinarily dedicated and industrious as he climbed up the ranks within the town. A self-made man, Charles Eitzen was truly a pillar of strength in the early days of Hermann.

The story of Eitzen’s life begins as a standard shop clerk until he buys out the business from his employer. Eitzen is credited with making early land deals along the Missouri River from Hermann to Washington. He was heavily involved in the lumber and shipping business, which was a lucrative place to invest in at the time. Upon his death in the late 1890s, Eitzen was the largest stockholder in Laclede Gas Light Company and was a distinguished investor in the Boatman’s Bank in St. Louis.

Politically, Charles Eitzen was a leader in both the military and his community. During the Civil War, Eitzen served as a Union militia captain and spent time on active duty. He held a Hermann town Board seat for 25 years, and during much of that time, he served as mayor. Eitzen was also responsible for the management of the public school system at that time. He was a delegate to the State Convention and a member of the 29th General Assembly. His political affiliation began with the Whig party, and his leanings evolved to Republican as that party emerged within our government.

Ever an Advocate for Hermann’s Success

Charles Eitzen’s influence spans from Missouri Rhineland to St. Louis. That is an incredible amount of clout for an early settler, but once you explore his history, you’ll find Eitzen to be a competent and astute decision-maker. By investing his interests in education, the primary industries (in existence and up-and-coming), and in local government, it is easy to recognize that Eitzen deserves a place in Hermann history.

Where Can You Learn More About Charles Eitzen in Hermann? 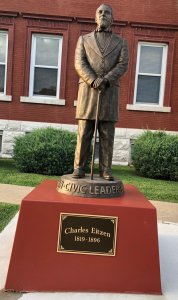 As a key contributor to the schooling system in Hermann, Charles Eitzen’s influence can be felt in the Historic Hermann Museum, housed in the well preserved and renovated German School Building. The museum is home to many German artifacts and treasures and is a meaningful stop to tour for German-English education history in Hermann.

A historic tribute itself now (sculpted in 1896), a bust with the likeness of Charles Eitzen is on display at the Hermann City Park. The pillar that the bust sits atop attributes generous deeds and public usefulness and names Charles Eitzen as a founder of Hermann.

Charles Eitzen’s legacy continued after his life in Hermann. When he passed away, Eitzen’s conditioned that a large sum of his holdings be used to construct a Courthouse in Hermann. It seems only pertinent that a monument to the man’s contributions graces the halls there. The 6-foot, full-body, metal statue of Eitzen was originally located by the banister inside the Gasconade County Courthouse until a move to the grounds outside was decided in 2018.

This ‘piece de la resistance’ is undoubtedly a signature of Hermann. Some aspects of the statue present themselves mightily, namely dignity and strength. Though Eitzen carries a cane, it doesn’t seem to detract from his prominence. Visit Hermann and stop by this influential Hermann Founder, Charles Eitzen, today!

For more from the Hermann statue series, check out our blog post for founders Hermann the German and George Bayer!