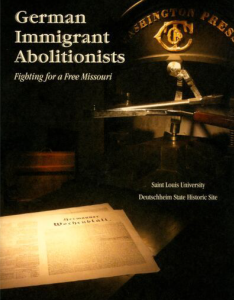 The abolitionist movement was an organized effort to end the practice of slavery in the United States—a massive crusade that required a network spanning the entire country. The views of settlers in Hermann was significant in the fight for this change. You see, many settlers that migrated from Germany to America were familiar with oppression and unfair racial practices. They recognized the fear and error in these accepted standards and they wanted better for their community and all people.

A Shared History in Hermann

At the forefront of the midwest movement, many German immigrants only spoke German, yet recognized that the hope for a growing democracy in America could only be realized if slavery was abolished. These enlightened men and women even started their own newspapers to spread their ideals for a color-blind democracy. Hermann was ground zero with the earliest anti-slavery newspaper in Missouri, the Hermanner Wochenblatt, which began in 1845. The site of this anti-slavery newspaper is on exhibit at the Deutschheim State Historic Site.  Also on exhibit is one of only three originals of the signed 1865 ordinance abolishing slavery—ultimately this became the state law that freed the enslaved in Missouri.

German immigrants took a courageous stand and worked with African American soldiers and other abolitionists not only to end the practice of slavery but to help improve education around it. While you might recognize the names of key abolitionists John Rankin, Hermann Raster or William Rathbone from U.S. History, Hermann has some of its own heroes. Judge Arnold Krekel, who chaired the convention to abolish Missouri slavery, and George Husmanntook, another abolitionist who signed the ordinance into law, were instrumental Hermann figures. Judge Krekel additionally worked with James Milton Turner and the 62nd Colored Infantry to raise funds to start what is now Lincoln University in Jefferson City, Missouri.

The Missouri Humanities Council and Cross-Cultural Strategies are teaming up with Visit Hermann to explore and celebrate the remarkable contributions German immigrants made to the abolition of slavery in Missouri. This symposium features highly regarded historians and scholars who will share the little-known history surrounding this time period. They are in great company with a sociologist and a playwright, both highly knowledgeable about the contributions of Hermann to the abolitionist movement.

The “Symposium:  The Shared History of Germans and African Americans in Missouri” will be held on Saturday, February 29th, from 2 p.m. to 5 p.m. at the historic Hermannhof Festhalle—located at 237 East First Street, Hermann, Missouri. There will be music from representatives of the German and African American community as well as an excerpt from the play An Amazing Story: German Abolitionists of Missouri. As part of the presentation, winners of the high school essay contest will be awarded for their dissertations, which focused on the opposition of slavery and the shared history of German and African Americans in Missouri. This entire event is free to the public but requires registration.

On the evening of the 22nd, don’t miss the Showboat Theatre production of a special tribute, The Gift of Jazz, where black stories of struggle and perseverance will be shared through music and open discussion. Consider visiting the Deutschheim State Historic Site to view the vital documents while they are on display. Share the chance to learn and preserve the stories of Hermann by focusing on this very important aspect of our past. These events provide an excellent opportunity for Hermann to initiate the first official Black History Month celebration.

Hermann, Missouri remains a proud and fair community today. The month of February is dedicated to love and appreciation of all of its history and community. Consider attending some of these first-time events and getting to know more about treasured accomplishments and future goals in Hermann.

For the full-size flyer, click on the below graphics.