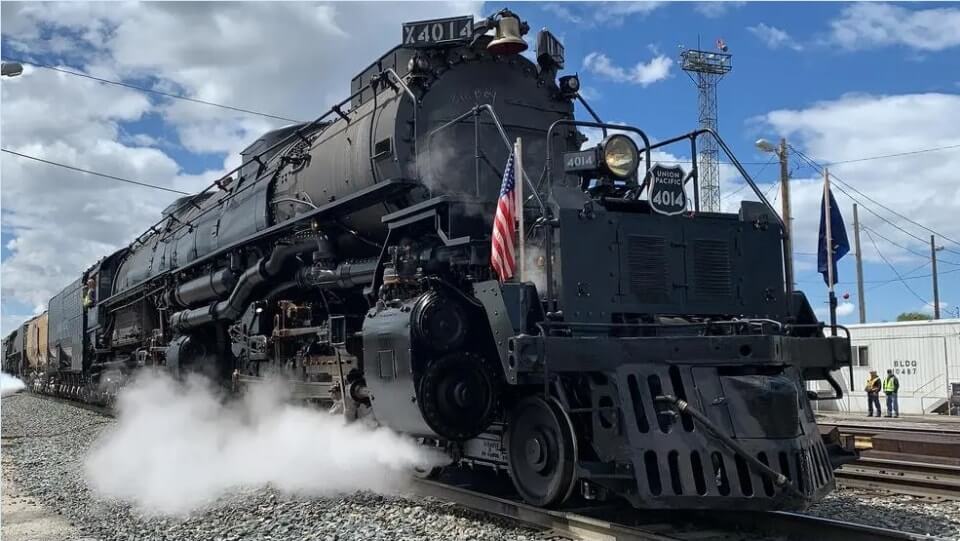 The Union Pacific Big Boy, which is the largest operational steam engine in the world, will be traveling through Hermann sometime between 1:15 pm and 1:45 pm on Monday, August 30th. Note: Times are subject to change. Please check the schedule at http://upsteam.com for current estimated times.

This may be a once-in-a-lifetime event! Built in 1941, this massive machine is one of the largest and most powerful steam locomotives ever built. It was restored to operational status by the Union Pacific Railroad 2016-2019.

To see the Big Boy yourself, bring your lawn chairs and sit along Wharf Street and the Riverfront Park in Hermann. Please keep safety, especially for children, in mind while viewing and photographing. See safety guidelines and other details in the following press release. 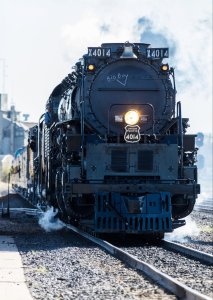 Union Pacific’s Big Boy No. 4014, will embark on “The Big Boy 2021 Tour” Aug. 5 to celebrate railroad heritage and the communities Union Pacific serves. This is the first tour since the locomotive was restored for 2019’s “Great Race” tours celebrating the 150th anniversary of the transcontinental railroad’s completion. The multi-year restoration took place at Union Pacific’s steam shop in Cheyenne, Wyoming, following a retirement that spanned six decades.

“Weighing in at 1.2 million pounds, the Big Boy makes a big impression in communities it visits, reminding us of bygone days and the important role the railroad continues to play in our global economy,” said Scott Moore, senior vice president – Corporate Relations and chief administrative officer. “This summer, we are proud to announce that the Big Boy will be back to tour through 10 of the states and hundreds of the communities which Union Pacific serves.”

No. 4014 will leave the Steam Shop in Cheyenne, Wyoming, August 5, making brief whistle-stops in communities across Arkansas, Colorado, Illinois, Kansas, Louisiana, Missouri, Nebraska, Oklahoma, Texas and Wyoming. The locomotive will be on display in the following cities:

No. 4014 will return to Cheyenne following the Denver stop. A complete list of overnight and whistle stops will be released at http://upsteam.com. Fans interested in getting the latest news regarding Union Pacific’s steam program and notifications of schedule updates can join the Union Pacific Steam Club at http://up.com/SteamClub.

Twenty-five Big Boys were built exclusively for Union Pacific, the first of which was delivered in 1941 to handle the steep terrain between Cheyenne and Ogden. Of the eight still in existence, No. 4014 is the world’s only operating Big Boy. The other seven can be found on display in Cheyenne, Wyoming; Denver, Colorado; Frisco, Texas; Green Bay, Wisconsin; Omaha, Nebraska; Scranton, Pennsylvania; and St. Louis, Missouri.

Union Pacific strongly encourages visitors to keep safety top of mind while viewing and photographing No. 4014 on its journey. For everyone’s safety:

The Experience the Union Pacific Rail Car, a multi-media walk-through exhibition providing a glimpse at the past while telling the story of modern-day railroading, will accompany the Big Boy on its tour. A steam tracking map showing No. 4014’s location and route will be available at upsteam.com.